Many in the exhibition and trade fair industry are aware of the challenges with utilizing the space as efficiently as possible. Tight event calendars require lean operations when it comes to planning, producing, moving in, running the show, moving out and tearing down, keeping the lead times as short as possible.

The marking of the stand positions, before actual production starts, is often performed during nights or at other odd hours and typically under stress. Traditionally the marking is carried out manually with tape and long tape measurers. It is a tedious, boring, time- and labor consuming operation and therefore costly.

Our robot-based system, transforms these challenges into an effective, sustainable and cost saving operation using state of the art technology. 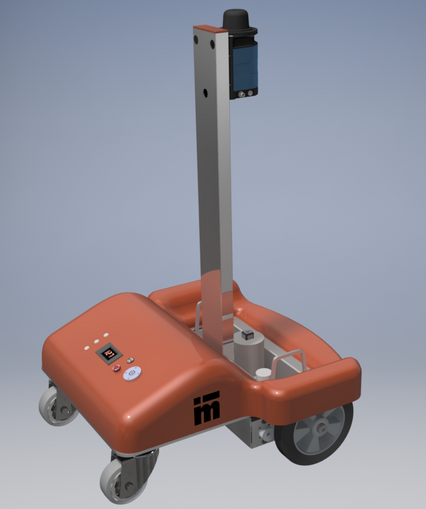 The benefits with our marking robot

Our new and improved robot

We now introduce an improved version of our Fair Marking Robot to meet future demands for increased productivity and profitability in the international exhibition and trade fair industry. Many players in the industry have been forced to reduce their staff during this difficult period of Covid-19 and when business gets back on track, it will have the opportunity to improve productivity through digitalization and robotization.

The new version will be available for ordering in the spring of 2022. It will completely replace the previous generation of robots. The goal of the new version has been increased productivity, greater flexibility and even easier handling. In addition to the functionality that the previous robot has, the following improvements have been made:

General description of the system

The marking of the stand position is done directly on the floor with a digital printer mounted in an autonomously controlled robot. The layout of the markers is based on the ordinary CAD-files from the planning of the event layout.

The chassis of the robot is made of aluminum and the design is very robust. The robot is battery powered and two drive wheels, one on each side, controls the motion. For support, additional two swivel casters are mounted in the rear end of the robot. The front of the robot is equipped with a bumper for mechanical obstacle detection. It can easily overcome damages to the floor and normal openings/holes into infrastructure as cable ducts as well as nails, screws and other common litter on the floor between events.

For the marking the robot carries an inkjet character device, printing markers (symbols, measurements and text) on most hard and flat surfaces. The robot can mark event layouts with any number of stands, with any orientation and with an array of irregular shapes, with a standard accuracy of 30 mm.

The robot is operated through a graphic user interface on a laptop, Windows, Linux or OS X. The laptop is communicating remotely with the robot through a wifi-network. All the robot functions are available via this user interface. On the robot itself a very rudimentary interface is installed with functions like on/off, battery voltage, operation mode indication and emergency stop. The robot also has an USB interfaces for connecting USB-memory sticks. The data-files for hall maps and marking instructions are loaded into the robot by the USB memory stick or directly via the wifi-network. The robot is insensitive to disruptions in the wifi network during operations.

Data is stored in the robot an entered either thru a USB stick or thru WIFI. This makes the robot fault tolerant to network issues during operation.

Below is a video of the previous floor marking robot

The capacity measured by sqm/hour depends on how many marks you want to do per stand and the size of the stands. However, our experience from customers is that one robot has the capacity to mark 20 000 sqm for less than 7 hours. From a technical point of view there is no upper limit concerning the size of area to mark more than the battery capacity. The battery capacity of the robot allows a run time up to 14 hours on one charge. Charging time is 12 hours. If time is critical its possible run multiple robots in parallel in the same hall decided within the local work planning process. The amount of characters in the texts have little to no impact on the time usage since the robot prints about 16 characters/s. 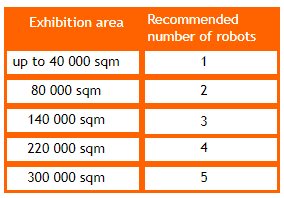 The robot operational cost for 10.000 square meters and 130 stands is about 5 Euro for ink and less than 1 Euro electricity (0.3 kWh). Materials for maintenance is less than 1 Euro.

The marks are printed with up to 16 characters and with a character height of 28 mm alternative 58 mm. Digits, letters and special characters can be printed. Custom characters/signs are possible.

The printer and color container are located in a self contained cassette that can easily be switched in and between the robots, only taking a few seconds.  At normal operation there are different cassettes with different colors. When changing color, just change the cassette. Today there are 4 standard colors, white, yellow, black and red. Other colors can be made available at request.

The marks can be washed away using detergents with a specific PH value, making it possible to control if marks should be kept or not while conducting normal floor cleaning. By using different colors multiple event layouts can be marked at the same marking occasion.

It is possible to print on most types of floor material as long the material is sealed on the surface as: 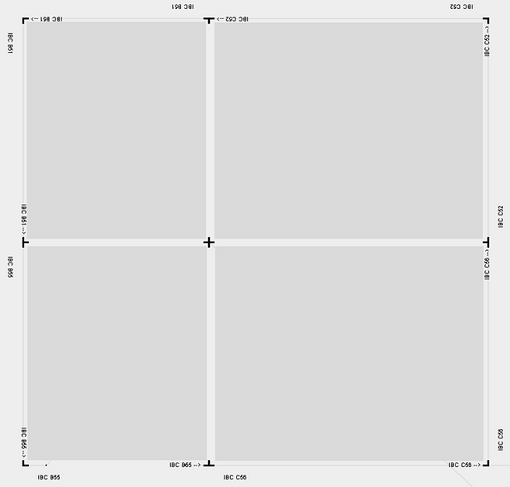 The printer and colour container is placed in a separate cassette that easily can be exchanged from the robot, takes a few seconds.  At normal operation you have different cassettes with different colours. When changing colour you just change the cassette. Today we have 4 standard colours, white, yellow, black and red. For an extra cost we can compound new colours at your request.

The marks can be washed away using detergents with a specific PH value, making it possible to control if markers should be kept or not while conducting normal floor cleaning. By using different colours multiple event layouts can be marked at the same marking occasion.

The standard battery is a 25 volt lithium-Ion battery with 29 Ah capacity. The battery running operation time (marking a normal event layout) is well over 8 hours. However, if extra capacity is requested, the robot can be equipped with two batteries and the total battery capacity adds up to 58 Ah. The cycle lifetime of the battery is 400-500 full discharge/charge cycles.

The robot uses an eye-safe laser scanner for positioning and orientation. The laser is reading walls and pillars as “landmarks”. Therefore, it is important that the halls have walls and pillars that can reflect the laser beam in an efficient way. As the laser beam has a practical range of about 30 meters, the layout of the hall should be such that the robot positioned anywhere in the hall gets efficient readings from landmarks. If the layout of the hall is very open (roof construction without pillars) it can be necessary to temporary add artificial landmarks during the marking process. One and a half meter vertical plastic tubes with a diameter of 75 -100 mm works very well as temporary landmarks.

The robot has capability to detect and manoeuvre around temporary and unknown obstacles (obstacles that is not included in the map files), for example people moving in front of the robot. The robot has two independent detection mechanisms, the laser scanner and the mechanical bumper in the front.

The system needs two packages of information. First a drawing of the hall itself as a CAD-file. That drawing has to be very correct concerning the measurements, within a centimetre or so. The CAD-file is processed in a PC with a software program supplied by us. The program generates an XML data file with map data for the specific hall. This has only to be done once per hall if not any changes is made of the shape of the hall. The second CAD-file is the drawing over the actual event layout to be marked. Also that CAD-file is processed in a PC with our software and another XML data file with information like coordinates and stand numbers as well as instructions like starting point, directions and block marking order is generated. The XML files are then loaded into the on-board computer via an USB-memory stick. In this process you can determine in what order the stands will be market and how many marks per stand. If the stands are numbered in the CAD-file, that number will then be printed in the marks associated to that stand. Today we can handle CAD-files in the format .dwg, but we will extend the capability to other formats as well.

The robot does not require any specific maintenance except charging the battery. The printer head needs to be cleaned with the built in cleaning system if the robot is to be stored more than a few days. Cleaning is made by the switch of a valve and pressing a button for a few seconds, all taking less than a minute in account. Forgetting this does not cause permanent damage but it will require some more extensive work to clean out the printer.

As long-term maintenance its recommended to calibrate the printhead every 5 years.

To facilitate maintenance and ensure the availability of robots, we offer our customer optional service and support agreement. The content of the agreement is individually adapted to the customer's needs.